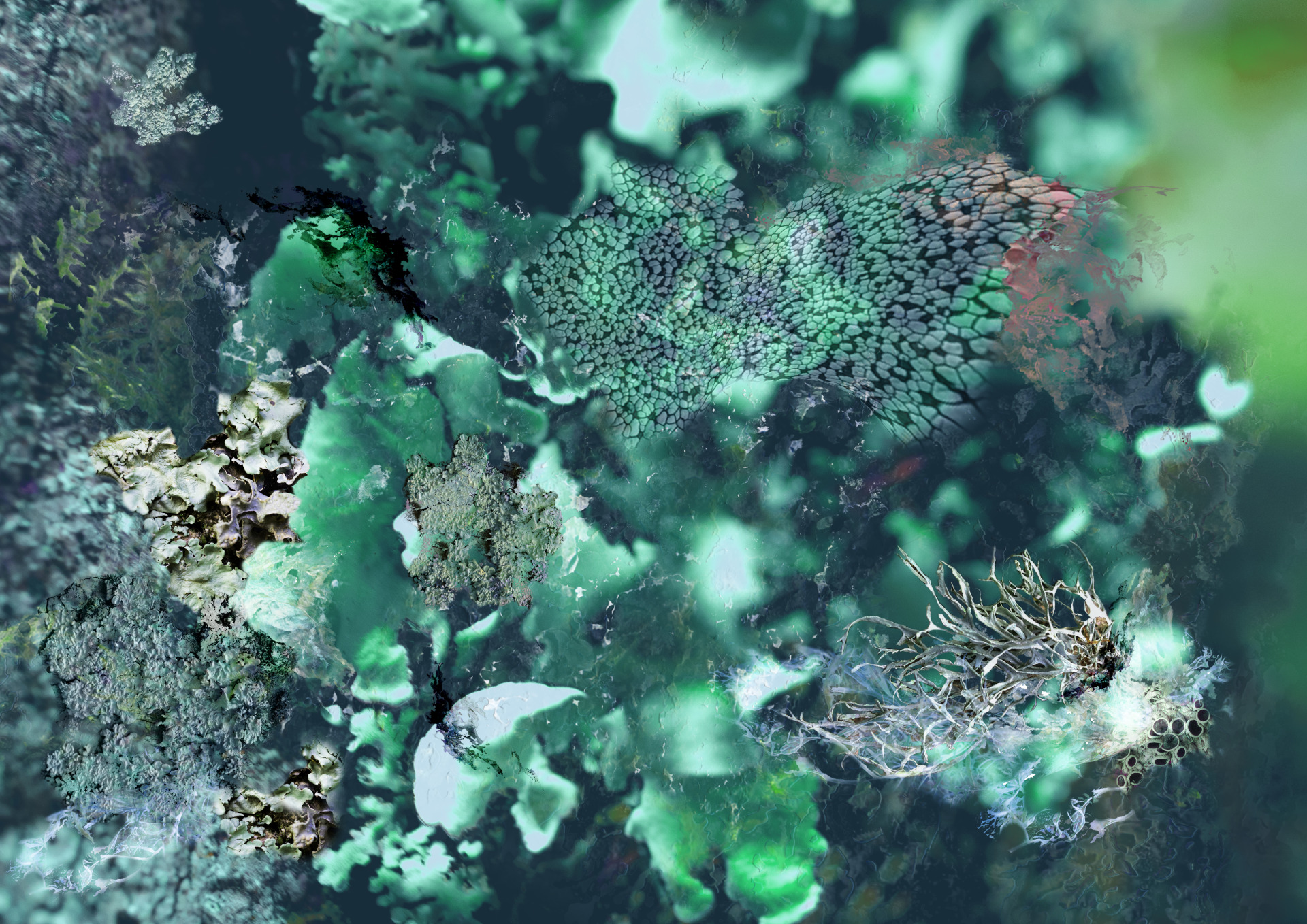 on line platform and virtual research laboratory for sound and art

Focussing on the voice in relation to noise and surroundings, in her live-performance Alessandra Eramo composes an original sound collage through extended vocal techniques and the dynamic use of electronics and field recordings, creating a hypnotic soundscape of abstract sounds, fragmented words, non verbal vocalizing, drones, distorted voice and unknown languages. In reference to sound poetry, her performance aims to generate a physical and immersive experience, like a spiritual exercise shared with the listeners.

All alone, all together, some in quarantine, some in the streets, some getting shot, some showing off that brand new automatic rifle. Because it’s our right to feel safe and protect our freshly cut green loan. We fall asleep in front of our smart devices, listening to conspiracy lullabies, while breathing ashes coming from too far away to be concerning. Did you see the video of that gigantic glacier breaking down and melting? It looks and sounds amazing! The spectacle of the apocalypse… now available in stream party!

...as bad as it seems is a virtual environment built in Mozilla Hubs, available for visitors to be experienced and explored online. A dome surrounds the space, it shows a 360-degrees video of digitally distorted and heavily compressed wildfire footage, the video pulsate following the intensity of the background sounds, an abstract and dry composition realised by exploring electromagnetic fields. Humanoids characters are distributed in the space, nearly frozen in selfie poses, their movement are subtle, slow and repetitive, their smartphones and heads are swapped. If approached their voice became hearable, each character shares a particular conspiracy theory with the close listener. The environment is dark and noisy, immaterial dark walls slowly move in the space, shading the visitor’s view while an ash-like abstract snow keeps falling. 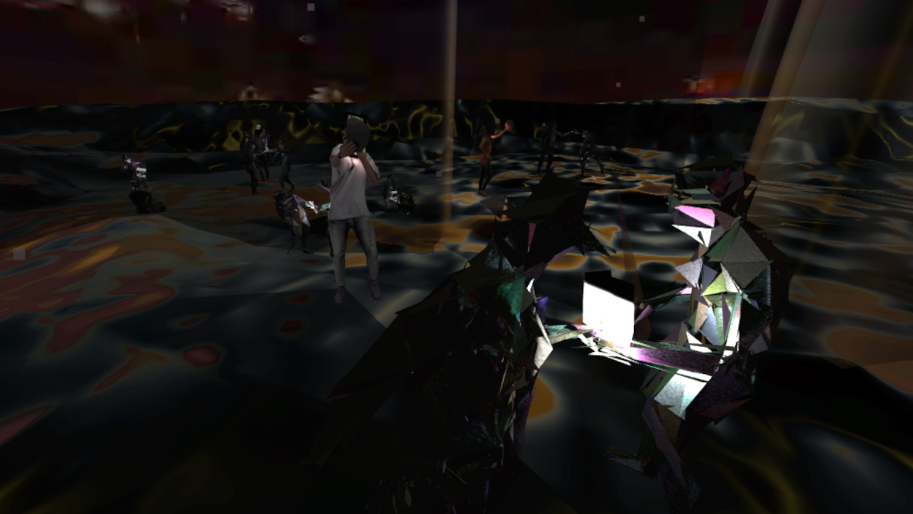 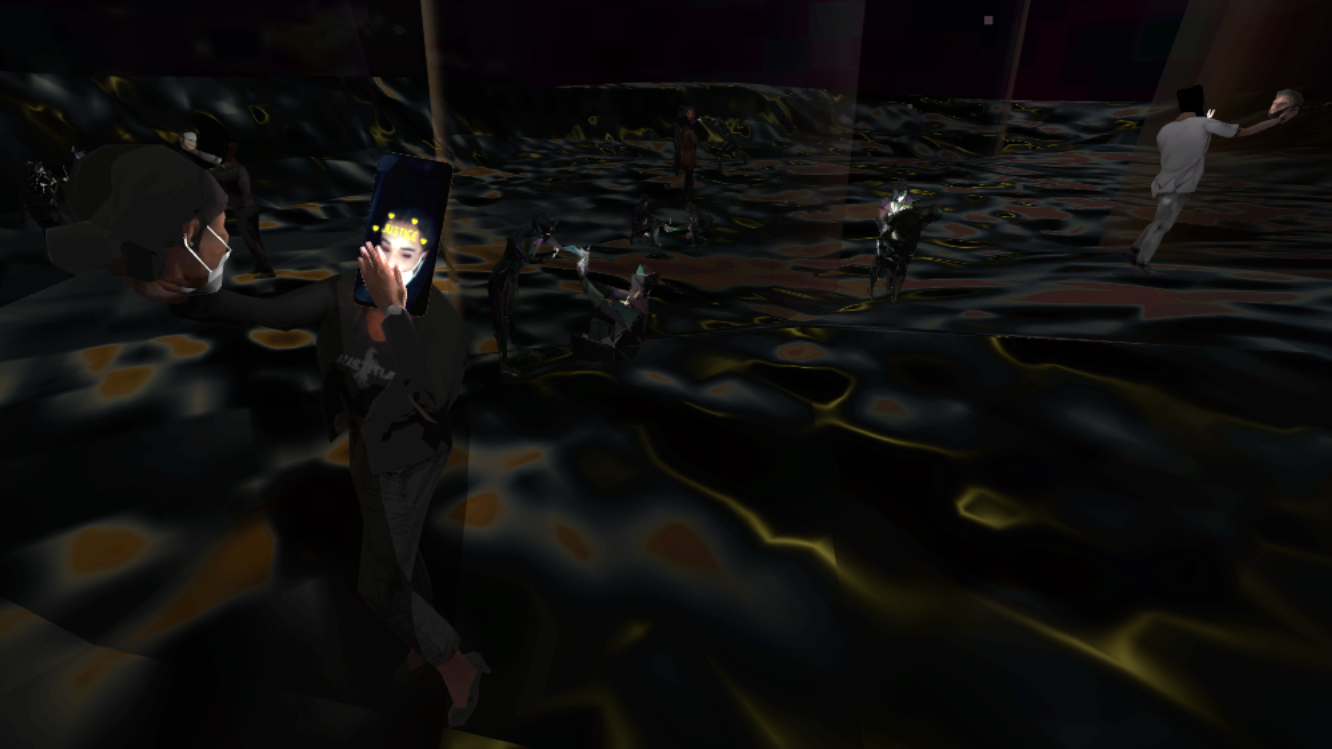 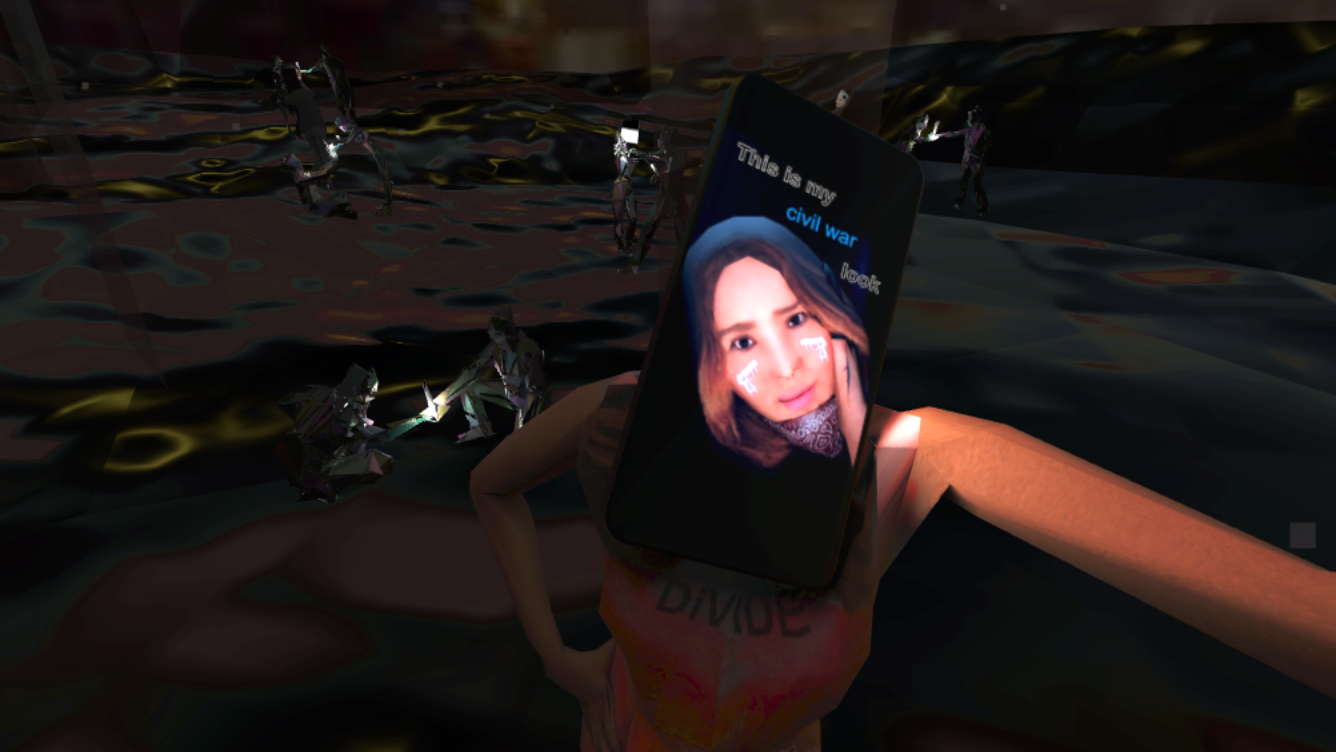 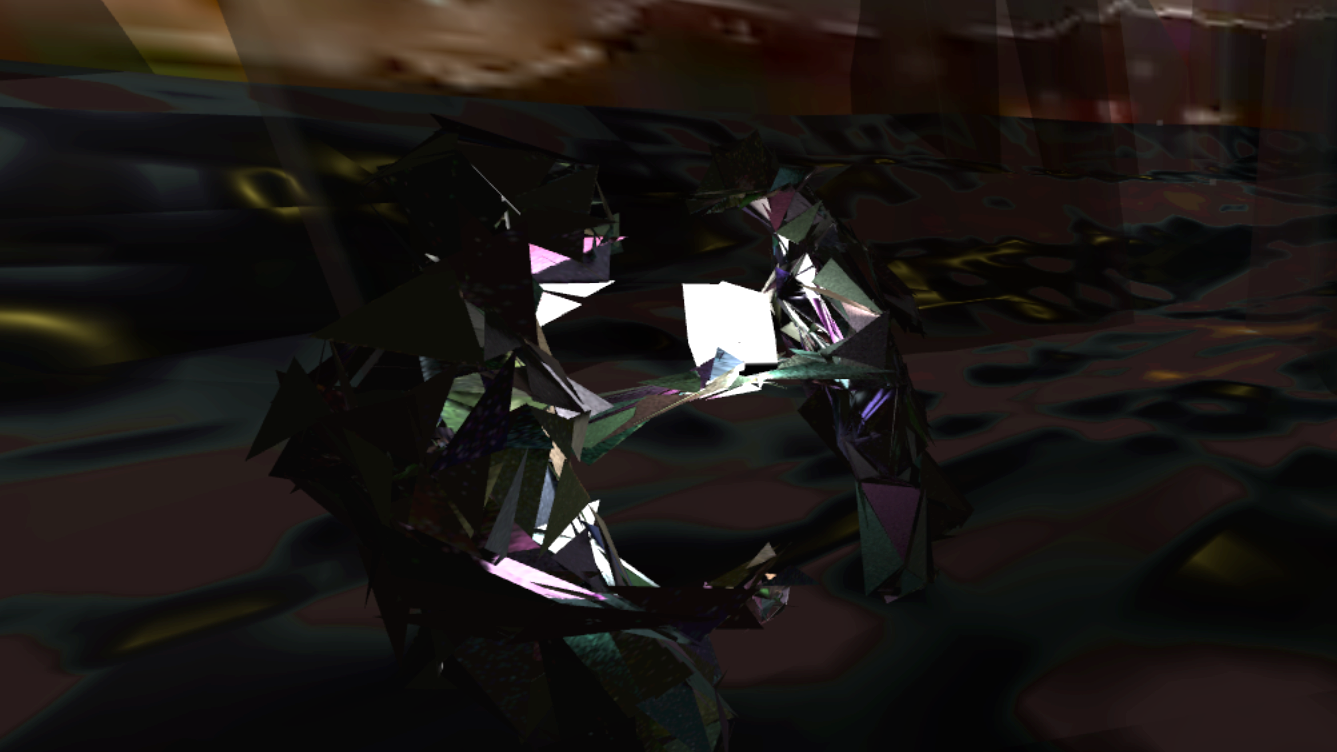 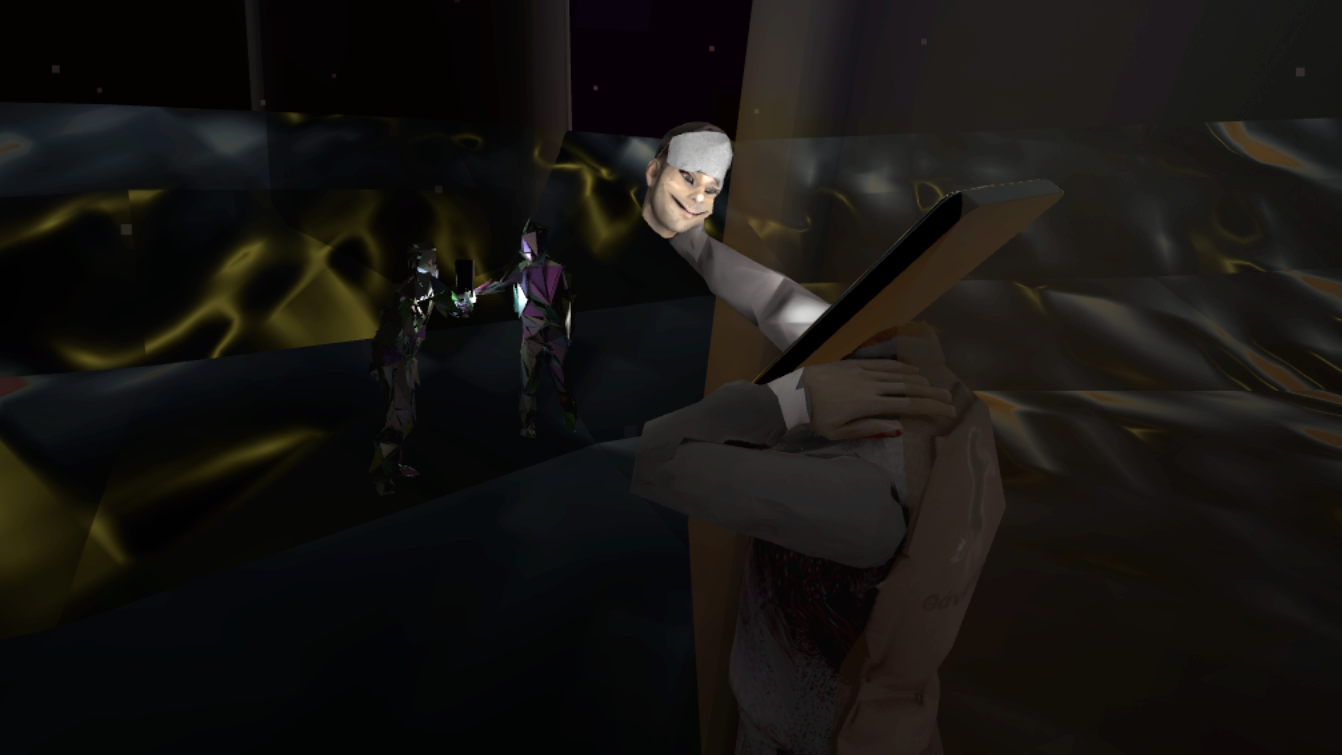 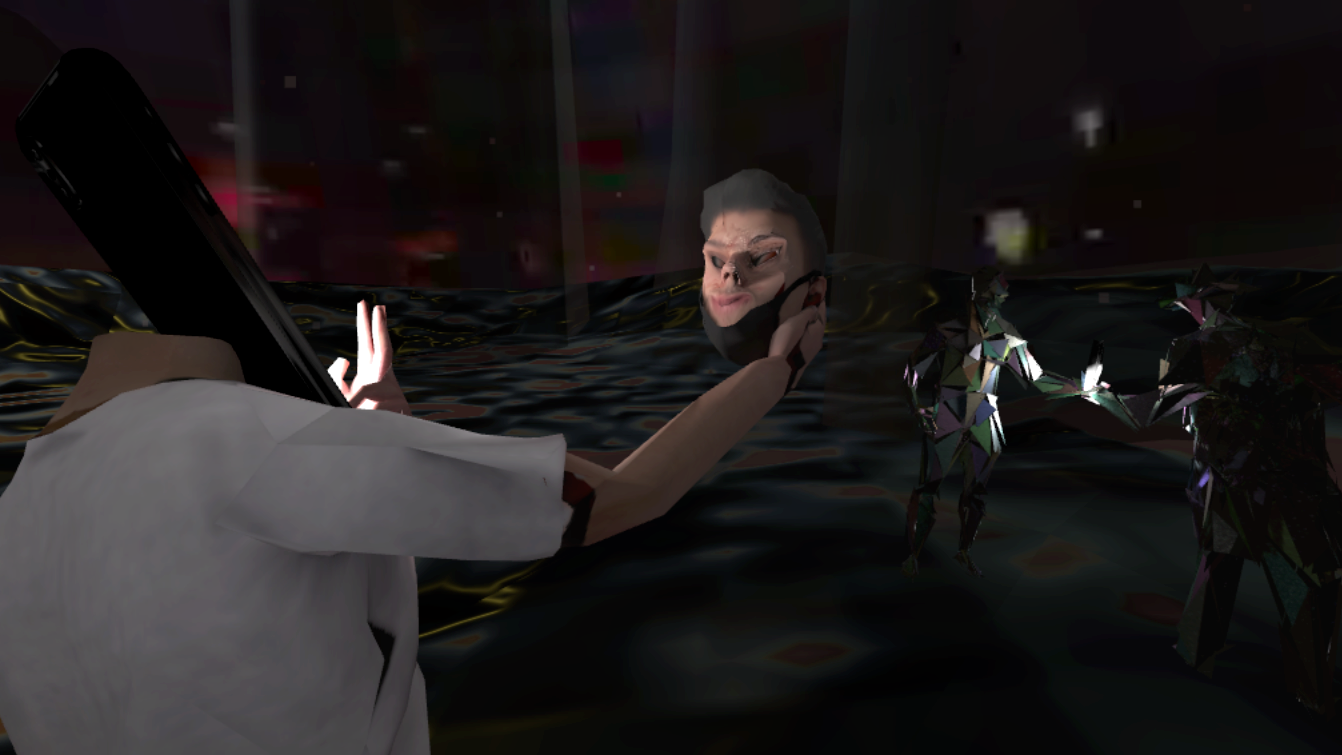 His focus revolves around interactive performances and installations, merging different media through technology and paying special attention to time-based composition.

His research addresses the digitisation of the human in new technologies and the virtual representations of the “real”, with a special focus on the influences that the internet and its derivates have on the human body and human behaviour. Stefano is a musician and composer of electronic and electro-acoustic music, he often collaborates with dance, theatre and video directors and regularly exhibits and performs in international music and new-media art festivals.

Stefano received a bachelor degree in Visual and Performing Art from the IUAV University of Venice and a magister’s degree after studying Transmedia Art with Brigitte Kowanz at the University of Applied Arts Vienna. Since 2010 he has been giving workshops around the globe about interactive media for arts and collaborating with Klaus Obermaier and Martina Menegon on various artistic projects.

Stefano currently lives and works in Vienna (AT).

I spent many months walking in the dunes of Maremma,
Marina di Donoratico, Baratti, and San Vincenzo... They are places that for those who go to the beach
occasionally seem sinister, abandoned, and inadvisable for bathers.

Notoriously dirty, run down and inhabited by strangers... these
wooded areas of the Mediterranean beaches are full of treasures
of biological diversity. Flora and fauna adapt to that rough course;
its breath, the sudden change, the depth, the taste, the temperature.

One actually sinks into that blanket of sand. Nobody
passes through it and you can easily observe every slight imprint and sign of life.
One day, I took it upon myself to count the drops in the morning
which solidified in the afternoon. Thousands of conical shapes
impossible to enumerate were intact....as if they were sewn in the sand.

Although always in the same place, their colour and blossom seemed
sudden to me, as if from overnight there was a considerable
change in brilliance, texture, and bloom. “Well, the atmospheric agents,
are not so forgiving in these areas..... the salt, the wind, and the sun”. After
becoming passionate about their shapes and changes, I thought I would describe them
in my own way, with some short poetic soundscape compositions that you can
read and listen to on this page.

Francesco Cavaliere (b. 1980 Piombino, Italy) is known for the sensitivity with which he combines sounds, materials and space, His works are capable of enlivening his listeners’ inner states in an imaginative journey populated by ephemeral presences, phenomena generated by glass, minerals and voices recorded using analogue and digital technologies. First introduced to the world through the tape "Neverending Somersault,” is the author and interpreter of the "Gancio Cielo" audio stories, released as a full length LP on the label Hundebiss (IT).

“The basis for Cavaliere’s music is derived from the prowess of his imagination, which at a young age was stimulated by a gift, given to him by his grandma. “At a very young age, my grandmother, who was a music teacher, gave to me a cassette record player. And as I was an only-child, I would sit in my room alone, and have conversations with the record player and my pre recorded voice. I communicated with it.” (Spencer Clark)

“La natura delle cose ama celarsi” (The nature of things loves to hide) is a path of research in continuous evolution, which deals with the dynamics of massification and accumulation of the creation and fruition processes, put in relation with the inevitable impermanence of everything. Necessity, experience, attention, memory, oblivion, presence, annihilation, abandonment are some of the themes explored through intermedial and transitory works, characterized by a common critical thought towards the dispersion caused by the contemporary mediatic collapse.

Milan, 1980.
Multimedia craftsman and restless observer, over the years he has collaborated with numerous international artistic realities and institutions, publishing and showing his work in Europe, Russia, Canada and America. Seeker of combinations organized according to the rules of harmony dictated by chance, he places the center of his research along blurred boundaries where sound, matter, ecology and relationship are in connection by each other, with the aim of activating states of mind that are receptive and opened to the dialogue.

How sounds contribute in shaping the affective atmosphere of a place? Describing affects as active forces that influence bodies, their movements and feelings, the research investigates sounds as affective tonalities, which deeply impact our everyday experience. Moving from outdoor to an on-line environment, the project presents fragments of listening, shards of essays and short notes, and invites the audience to freely associate these elements together, creating an aesthetic object to be archived in a special collection and further called back.

I am an architect, musician, sound artist, and scholar. I have a PhD in Regional planning and public policies, and I’m currently Postdoctoral research fellow at Iuav University of Venice, Italy. My research deals with the relationship between Urban Studies and Sound Studies. In particular, I’m interested in collaborative and participatory approach to urban policy analysis and design through methodologies emerging within Urban Planning, Urban Sociology and Sound Art practice. Sound is central to my artistic and academic practice, as I intend critical listening a pivotal tool for the investigation of urban and cultural transformations affecting particularly vulnerable areas, such as depopulation, segregation and loss of local identities. Through articles, lectures, compositions, performances, and installations I aim to foster sonic awareness and to empower institutions and local communities, exploring new potentials for urban regeneration, participatory processes and local development.

The Audible Manifesto of Rural Futurism

An audio journey towards future ruralism, experimented through the voices of two villages’ local communities in the Fortore rural region, Southern Italy

The Manifesto of Rural Futurism is a document written by Leandro Pisano and Beatrice Ferrara in 2019, produced as a result of a collective thinking and practical process brought on by artists, scholars, curators, critics and people in the framework of Liminaria, a 5-year project sound art residency and fieldwork-based research platform aimed at developing “sustainable” cultural, social and economic networks in the Fortore rural region, Southern Italy.

As final outcome of the first stage of this project (2014-2018), the Manifesto of Rural Futurism is founded on a series of propositions aiming at rethinking rural areas and re-imagining their possible futures, understanding them as complex spaces actively immersed in the dynamism of encounters, flows and fluxes of contemporary geographies and critically questioning the modernistic discourses of capitalism and metropolitanism in which they are marginalised and considered as doomed to oblivion.

“Rural Futurism” is a critical perspective, in which multiple points of view (and listening) converge: art – and techno-culture(s) more specifically – provide new and striking ways to rethink what ‘rurality’ is (and could be). By interrogating our relationship to memory and the archives of the past, artistic practice reinserts the concept of the ‘rural’ into the framework of contemporary narratives, deconstructing those discourses that relegate it to the status of a mere residue of wider political, economic and cultural processes spanning a global scale.

In its materiality, sound invites us to experience rural locations and abandoned places as spaces in which to question our approach to history and landscape, our sense of living in a specific place and the relationship that we have with it. The sound of environments, spaces and landscapes reveal the challenges and territorial transformations that inform the ideological, infrastructural and biological ecosystems to which we form a part. In this sense, listening practices are deployed as a way to critically traverse the “border territories” of the rural territories, challenging persisting notions about the “inescapable marginality”, “residuality” and “peripherality” of rural areas.

The ten audio tracks presented in this context were recorded by Leandro Pisano and Andrea Cocca in July 2020 in the villages of Baselice and Montefalcone di Valfortore. Each audio piece is based on different readings of the Manifesto of Rural Futurism made by some people of the local communities. I would like to acknowledge the following people for their support of this project: Gianbenedetto Barbato, Clemente Bianco, Michelina Bianco, Maria Bianco, Giovanni Calabrese, Michele Caserio, Ireneo Calò, Sara Esposito, Beatrice Ferrara, Andrea Palazzi, Rocco Palazzi, Agostina Paolozza, Milena Petrucci, Philip Samartzis, Brenda Silvestri, Modesto Silvestri.

Leandro Pisano is a curator, writer and independent researcher who is interested in intersections between art, sound and technoculture. The specific area of his research deals with political ecology of rural, marginal and remote territories. He is founder and director of Interferenze new arts festival (2003) and frequently he is involved in projects on electronic and sound art, including Mediaterrae Vol.1 (2007), Barsento Mediascape (2013) and Liminaria (2014-18). Among the sonic arts exhibitions he has curated, there are “Otros sonidos, otros paisajes” (MACRO Museum – Rome, Italy, 2017), “Alteridades de lo invisible” (Festival Tsonami, Valparaíso, Chile, 2018) and “Manifesto of Rural Futurism” (Italian Cultural Institute of Melbourne, Australia, 2019). He conducted presentations, conferences and workshops in different universities or during events related with new media aesthetics, design, sound and territorial regeneration processes in several countries worldwide. He has written articles in several magazines, such as Corriere della Sera – La Lettura, Blow-Up, Doppiozero, Neural, Exibart and Nero Magazine. He is author of the book “Nuove geografie del suono. Spazi e territori nell’epoca postdigitale”, published in Milan by Meltemi (2017).

Leandro Pisano holds a PhD in Cultural and Post-Colonial Studies from University of Naples “L’Orientale”, where he is a member of Center for Postcolonial and Gender Studies (CSPG). He is presently Honorary Scientific Fellow in Anglo-American Literature at University of Urbino “Carlo Bo”. He teached as adjunct professor at Academy of Arts in Naples and he has been Honorary Scientific Fellow in Didactics of Latin at University of Naples “Federico II”, where he received his Master degree with honors in Ancient Greek, Latin and Italian Literature, focusing his studies on digital philology, electronic teaching methodology and relationship between new media and classic disciplines.